Bonjour Noe! First of all, thank you for agreeing to do this interview. And jumping right in, our first question is: who are you and how would you introduce yourself?

So my name is Noé Bex, I am 26 and I am a French lector in Berzsenyi. And I do not know what to say, which is awkward, because I am always asking the students to introduce themselves.

I am from the southwest, I grew up in Perpignan, and in the countryside around Montauban.

What is it like there? Well, boring. And empty. But also pretty, nice and comfortable.

And back in France, what did you study?

At first, I did what we call in French a „preparatory class”, it is to prepare for exams. So, we have this system in France, where you have “big schools” (Grand Écoles), they are like prestigious universities, this is the name they give to them. And so, we have these classes to prepare for the exams to get into them, as it is quite difficult. It usually takes two to three years. So, I did that in literature for one year then I got into Science Po, which is a political institute. I studied there for five years, my specialisation was social studies, so like social-research, sociology. And then I went to the Netherlands and I did another master’s in cultural mediation, art education, this kind of stuff.

Before working as a lector, what jobs did you have?

Well beside doing internships, like everyone, I was working when I was a student. I was working in call centres, you know where you call someone, trying to sell stuff, or asking some questions. I did that when I was a student, then, my first „real job”, I guess, was in Vienna. I was doing some research for some cultural institute. It was nice, though it did not last very long, just one year. And then I arrived in Hungary, and did some small jobs, I worked at a call centre again, and then I became a teacher. At first, I was teaching in the Eötvös Collégium, which is around Móricz, and then I arrived in Berzsenyi.

So teaching it came to be. What do you think about it, how do you like it?

Yeah, it is alright. For me it is a little hard being a figure of authority. I guess it depends on the courses, the classes. It actually depends on a lot of stuff, sometimes it is boring, sometimes it is not. It is the same as for when you area student, I guess.

Is there something you particularly like or dislike about it?

On the topic of Berzsenyi, how do you like it here?

It is fine. I mean it’s nice, the students are motivated, active. I mean it is a good school, and even the worst students are smart, you know, so it is not especially hard.

And now that this phase of life is coming to an end, what are you planning to do the future? That’s a big question. I do not know what will happen to be honest. You see, I am not sure about staying in Hungary so far, but I really do not know.

What short term plans do you have then?

I would be lying if I said I have any short-term plans. As you can see by my studies, my whole moving around, I am not really planning a lot, and it is not good advice to do that. Yeah, I do not really know. Thinking of maybe doing a PhD, and hopefully getting a job in the field I studied. It is a bit hard, there is not a lot of employment in cultural research, as you can imagine.

And at last, is there anything you would like to tell the French students of Berzsenyi?

I do not know. I mean I am saying so many things to them all the time so what should I tell them now? Oh, I am so bad at this, I do not know any quotes or anything motivating. Stay in school, be good kids. You can make a good sentence out of this.

Well, then thank you for…

Yeah, I don’t like doing long interviews that much.

Long interviews are the best. In research at least. You tire the people, and they end up saying so much. And oh, that is where you get your quote. So that is my advice to you, make it long.

Well, thank you Noé for doing this interview, and also thank you for your work here in Berzsenyi. In the name of all students you taught: It was great. 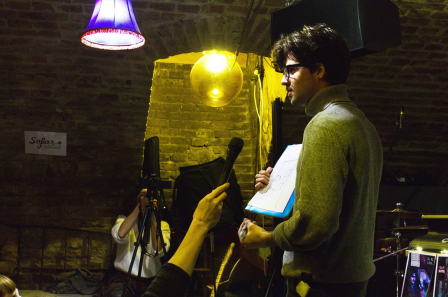 A stand-up carrier in the making

From social studies to teaching to stand-up. Quite the journey.